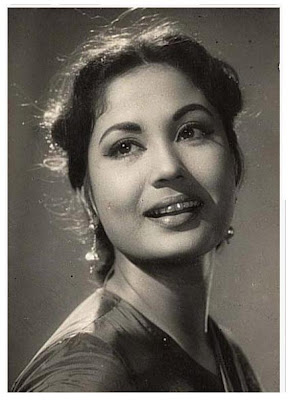 Meena Kumari (August 1, 1932 – March 31, 1972), born Mahjabeen Bano, was an Indian movie actress and poetess. She is regarded as one of the most prominent actresses to have appeared on the screens of Hindi Cinema. During a career spanning 30 years from her childhood to her death, she starred in more than ninety films, many of which have achieved classic and cult status today.
Kumari gained a reputation for playing grief-stricken and tragic roles, and her performances have been praised and reminisced throughout the years. Like one of her best-known roles, Chhoti Bahu, in Sahib Bibi Aur Ghulam (1962), Kumari became addicted to alcohol. Her life and prosperous career were marred by heavy drinking, troubled relationships, an ensuing deteriorating health, and her death from liver cirrhosis in 1972.
Kumari is often cited by media and literary sources as "The Tragedy Queen", both for her frequent portrayal of sorrowful and dramatic roles in her films and her real-life story.
Meena Kumari gained fame with her role as a heroine in Vijay Bhatt's Baiju Bawra (1952). This heroine always negated herself for the material and spiritual advancement of the man she loved and was even willing to annihilate herself to provide him the experience of pain so that his music would be enriched. She became the first actress to win the Filmfare Best Actress Award in 1953 for this performance.
Meena Kumari highly successfully played the roles of a suffering woman in Parineeta (1953), Daera (1953), Ek Hi Raasta (1956), Sharda (1957), and Dil Apna Aur Preet Parayi (1960). Though she cultivated the image of a tragedienne, she also performed commendably in a few light-hearted movies like Azaad (1955), Miss Mary (1957), Shararat (1959), and Kohinoor (1960).
Read More: http://en.wikipedia.org/wiki/Meena_Kumari
===================================================
Video: Meena Kumari - Pakeezah, Sahib Bibi Aur Ghulam
====================================================
Featured Icons