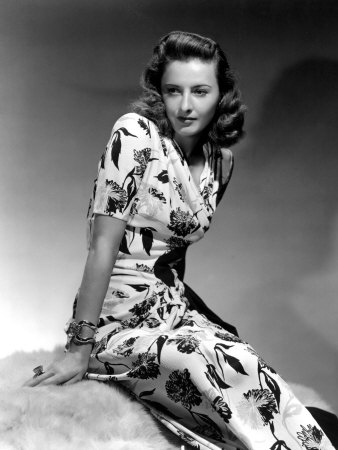 Barbara Stanwyck (July 16, 1907 – January 20, 1990) was an American actress. She was a film and television star, known during her 60-year career as a consummate and versatile professional with a strong screen presence, and a favorite of directors including Cecil B. DeMille, Fritz Lang and Frank Capra. After a short but notable career as a stage actress in the late 1920s, she made 85 films in 38 years in Hollywood, before turning to television.
Stanwyck was nominated for the Academy Award four times, and won three Emmy Awards and a Golden Globe. She was the recipient of honorary lifetime awards from the Motion Picture Academy, the Film Society of Lincoln Center, the Golden Globes, the Los Angeles Film Critics Association, and the Screen Actors Guild, has a star on the Hollywood Walk of Fame and is ranked as the eleventh greatest female star of all time by the American Film Institute.
Stanwyck's first sound film was The Locked Door (1929), followed by Mexicali Rose in 1929. Neither film was successful; nonetheless, Frank Capra chose Stanwyck for his Ladies of Leisure (1930).[14] Numerous memorable roles followed, among them the children's nurse who saves two would be juvenile murder victims in Night Nurse (1931), the ambitious woman from "the wrong side of the tracks" in Baby Face (1933), the self-sacrificing mother in Stella Dallas (1937), Molly Monahan in 'Union Pacific' (1939) with Joel McCrea, the con artist who falls for her would-be victim (played by Henry Fonda) in The Lady Eve (1941), the woman who talks an infatuated insurance salesman (Fred McMurray) into killing her husband in Double Indemnity (1944), the columnist caught up in white lies and Christmas romance in Christmas in Connecticut (1945) and the doomed wife in Sorry, Wrong Number (1948). Stanwyck was reportedly one of the many actresses considered for the role of Scarlett O'Hara in Gone With The Wind (1939), although she wasn't given a screen test. In 1944, Stanwyck was the highest-paid woman in the United States.
Read More: http://en.wikipedia.org/wiki/Barbara_Stanwyck
=========================================
Movie Legends - Barbara Stanwyck
http://www.youtube.com/watch?v=02rPCSRLq0c
========================================
Featured Icons