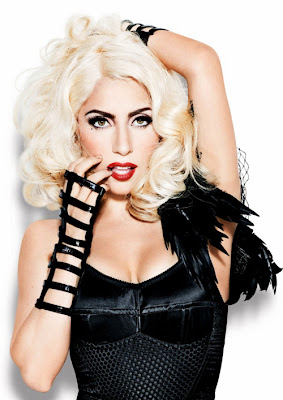 Lady Gaga (Stefani Joanne Angelina Germanotta (/ˈstɛfəniː dʒʌrməˈnɑːtə/; born March 28, 1986), is an American singer and songwriter. Born and raised in New York City, she primarily studied at the Convent of the Sacred Heart and briefly attended New York University's Tisch School of the Arts before withdrawing to focus on her musical career. She began performing in the rock music scene of Manhattan's Lower East Side, and by the end of 2007, was signed with Streamline Records. Employed as a songwriter for the record company, her vocal abilities captured the attention of recording artist Akon, who signed her to his label Kon Live Distribution.

Lady Gaga came to prominence as a recording artist following the release of her debut album The Fame (2008), which was a critical and commercial success that topped charts around the world and included the international number-one singles "Just Dance" and "Poker Face". After embarking on the Fame Ball Tour, she followed the album with The Fame Monster (2009), which spawned the worldwide hit singles "Bad Romance", "Telephone" and "Alejandro" and allowed her to embark on the eighteen-month long Monster Ball Tour, which later became one of the highest-grossing concert tours of all time. Her most recent album Born This Way (2011) topped the charts of most major markets and generated more international chart-topping singles that include "Born This Way", "Judas" and "The Edge of Glory". Beside her musical career, she involves herself with humanitarian causes and LGBT activism.

Influenced by such acts as David Bowie, Michael Jackson, Madonna and Queen, Lady Gaga is well recognized for her flamboyant, diverse and outré contributions to the music industry through fashion, performance and music videos. She has sold an estimated 23 million albums and 64 million singles worldwide, making her one of the best-selling music artists of all time and her singles some of the best-selling worldwide. Her achievements include four Guinness World Records, five Grammy Awards and thirteen MTV Video Music Awards. Lady Gaga has consecutively appeared on Billboard magazine's Artists of the Year (scoring the definitive title in 2010), is regularly placed on lists composed by Forbes magazine, and was named one of the most influential people in the world by Time magazine.