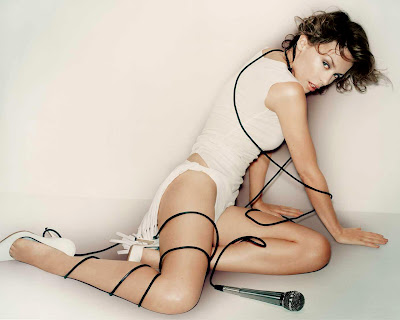 Kylie Ann Minogue, OBE ( /ˈkaɪliː mɨˈnoʊɡ/; born 28 May 1968) - often known simply as Kylie - is an Australian singer, recording artist, songwriter, showgirl, and actress. After beginning her career as a child actress on Australian television, she achieved recognition through her role in the television soap opera Neighbours, before commencing her career as a recording artist in 1987. Her first single, "Locomotion", spent seven weeks at number one on the Australian singles chart and became the highest selling single of the decade. This led to a contract with songwriters and producers Stock, Aitken & Waterman. Her debut album, Kylie (1988), and the single "I Should Be So Lucky", each reached number one in the United Kingdom, and over the next two years, her first 13 singles reached the British top ten. Her debut film, The Delinquents (1989) was a box-office hit in Australia and the UK despite negative reviews.
Initially presented as a "girl next door", Minogue attempted to convey a more mature style in her music and public image. Her singles were well received, but after four albums her record sales were declining, and she left Stock, Aitken & Waterman in 1992 to establish herself as an independent performer. Her next single, "Confide in Me", reached number one in Australia and was a hit in several European countries in 1994, and a duet with Nick Cave, "Where the Wild Roses Grow", brought Minogue a greater degree of artistic credibility. Drawing inspiration from a range of musical styles and artists, Minogue took creative control over the songwriting for her next album, Impossible Princess (1997). It failed to attract strong reviews or sales in the UK, but was successful in Australia.
Minogue returned to prominence in 2000 with the single "Spinning Around" and the dance-oriented album Light Years, and she performed during the closing ceremonies of the 2000 Sydney Olympics. Her music videos showed a more sexually provocative and flirtatious personality and several hit singles followed. "Can't Get You Out of My Head" reached number one in more than 40 countries, and the album Fever (2001) was a hit in many countries, including the United States, a market in which Minogue had previously received little recognition. Minogue embarked on a concert tour but cancelled it when she was diagnosed with breast cancer in May 2005. After surgery and chemotherapy treatment, she resumed her career in 2006 with Showgirl: The Homecoming Tour. Her tenth studio album X was released in 2007 and was followed by the KylieX2008 tour. In 2009, she embarked upon her For You, For Me Tour, her first concert tour of the United States and Canada, and the following year released her eleventh studio album, Aphrodite.
Minogue has achieved worldwide record sales of more than 68 million, and has received notable music awards, including multiple ARIA and Brit Awards and a Grammy Award. She has mounted several successful and critically acclaimed concert world tours and received a Mo Award for "Australian Entertainer of the Year" for her live performances. Bestowed from Britain's Queen Elizabeth II, she was awarded the Order of the British Empire (O.B.E.) at Buckingham Palace in 2008 "for services to music". In the same year she was awarded France's highest cultural honour, the Ordre des Arts et des Lettres from the French government for her contribution to the enrichment of French culture. In 2011, I Should Be So Lucky was added to the National Film and Sound Archive of Australia's Sounds of Australia registry. While also in 2011, Minogue was awarded an honorary Doctor of Health Science (D.H.Sc.) degree by Anglia Ruskin University in the United Kingdom of for her work in raising awareness for breast cancer. On 27th November 2011, on the twenty-fifth anniversary of the ARIA Music Awards, Kylie Minogue was inducted by the Australian Recording Industry Association into the ARIA Hall of Fame. In addition, Minogue is Australia's biggest selling solo recording artist in history. In fact she is the first, and to date, the only artist in UK and Australian chart history to have number one albums across four consecutive decades (1980's, 90's, 2000's and 2010's).
==========================================
Kylie Minogue - Can't Get You Out Of My Head (Music Video)
http://www.youtube.com/watch?v=IFx3WX4DES0
==================================================
Featured Icons