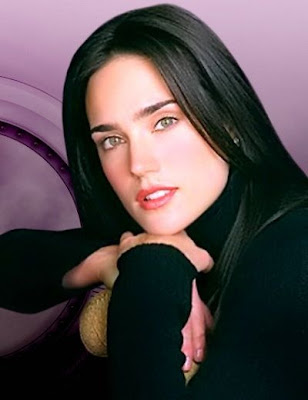 Jennifer Lynn Connelly (born December 12, 1970) is an American film actress, who began her career as a child model. She appeared in magazine, newspaper and television advertising, before making her motion picture debut in the 1984 crime film Once Upon a Time in America. Connelly continued modeling and acting, starring in films such as the 1986 Labyrinth and the 1991 Career Opportunities. She gained critical acclaim for her work in the 1998 science fiction film Dark City and for her portrayal of Marion Silver in the 2000 drama Requiem for a Dream.
In 2002, Connelly won an Academy Award, a Golden Globe Award and a BAFTA Award for her supporting role as Alicia Nash in Ron Howard's 2001 biopic A Beautiful Mind. Her later credits include the 2003 Marvel superhero film Hulk, the 2005 thriller Dark Water, the 2006 drama Blood Diamond, the 2008 science fiction remake The Day the Earth Stood Still and the 2009 romantic comedy He's Just Not That Into You.
Connelly was named Amnesty International Ambassador for Human Rights Education in 2005. She has been the face of Balenciaga fashion advertisements, as well as for Revlon cosmetics. Magazines including Time, Vanity Fair and Esquire, as well as the Los Angeles Times newspaper have included her on their lists of the world's most beautiful women.
Connelly gained public recognition with Jim Henson's 1986 fantasy film Labyrinth, in which she played Sarah, a teenager on a quest to rescue her brother Toby from the world of goblins. Although a disappointment at the box office, the film later became a cult classic. The New York Times, while noting the importance of her part, panned her portrayal: "Jennifer Connelly as Sarah is unfortunately disappointing. Perhaps Mr. Henson gave too much attention to his puppets and not enough to developing a compelling performance in his lead actress. She looks right, but she lacks conviction and seems to be reading rehearsed lines that are recited without belief in her goal or real need to accomplish it. Since the film has only five human characters – Sarah, her parents, who appear briefly at the beginning, baby Toby and Jareth, the goblin king – Sarah's role is very important". Two years later, she starred as a ballet student in the Italian film Étoile, and portrayed college student Gabby in Michael Hoffman's Some Girls.
Read More: http://en.wikipedia.org/wiki/Jennifer_Connelly
==========================================
VIDEO: Jennifer Connelly
http://www.youtube.com/watch?v=PVI48otri3E
Featured Icons