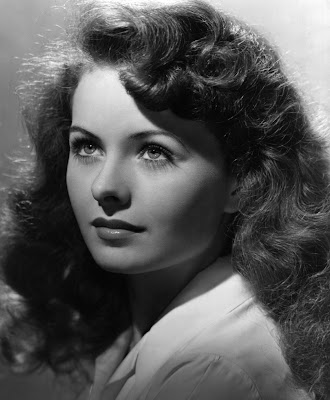 Jeanne Elizabeth Crain (May 25, 1925 – December 14, 2003) was an American actress.
In 1944 Crain starred in Home in Indiana and In the Meantime, Darling. Her acting was critically panned, but she gained nationwide attention. It resulted in landing the leading role in The Shocking Miss Pilgrim in October 1944, a musical film which was eventually shelved and made with Betty Grable.
Crain first received critical acclaim when she starred in Winged Victory (1944). She co-starred in 1945 with Dana Andrews in the musical film State Fair, in which Louanne Hogan dubbed Crain's singing numbers. After that, Crain often had singing parts in films, and they were invariably dubbed, in most cases by Hogan. Also in 1945, Crain starred in Leave Her to Heaven with Gene Tierney.

In 1949, Crain appeared in three films — A Letter to Three Wives, The Fan and Pinky, the latter earning her an Academy Award nomination for Best Actress. Pinky was controversial, since it told the story of a light-skinned African-American woman who passes for white in the Northern United States. Although Lena Horne and other black actresses were considered, Darryl F. Zanuck chose to cast a white actress for box-office reasons.