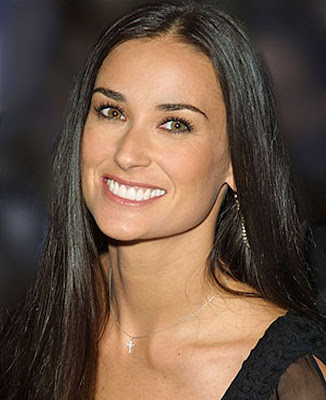 Demi Moore (born November 11, 1962 as Demi Gene Guynes) is an American actress.
After minor roles in film and a role in the soap opera General Hospital, Moore established her career in films such as St. Elmo's Fire (1985), and in the early 1990s, became one of the highest paid actresses in Hollywood with her successes in Ghost (1990), A Few Good Men (1992), Indecent Proposal (1993), and Disclosure (1994).
Moore took her professional name from her first husband, musician Freddy Moore, and is the mother of three daughters from her second marriage to actor Bruce Willis. She married her third husband, actor Ashton Kutcher, in 2005, and separated from him in 2011.
After training with John Casablancas, the founder of Elite Model Management and posing as a cover model for Oui magazine, Moore made her film debut with a small supporting role in the 1981 deaf-teen drama Choices, directed by Silvio Narizzano. She joined the ensemble of the 1982 3-D science fiction/horror film Parasite after director Charles Band instructed casting director Johanna Ray to "find me the next Karen Allen." However, Moore was not widely known until she played the part of Jackie Templeton on the ABC soap opera General Hospital from 1982 to 1983.
In the mid-1980s, Moore appeared in the youth-oriented films St. Elmo's Fire, Blame It on Rio and About Last Night..., and she was often listed as one of the Brat Pack, a name the media dubbed a certain group of top young actors at the time. In 1988, she starred in The Seventh Sign directed by Carl Schultz. After the commercial success of Ghost, Moore was given more prominent roles in A Few Good Men, Indecent Proposal, Disclosure, and The Hunchback of Notre Dame for which she was the first actress to reach the $10 million salary mark.
Moore at the Huffington Post Pre-Inaugural Ball, 2009.
During the early 1990s, she was the highest paid actress in Hollywood.[citation needed] She never surpassed the success of Ghost, and had a string of less successful films like Nothing but Trouble, The Scarlet Letter, The Juror, Striptease, and G.I. Jane. Moore's Passion of Mind co-star Joss Ackland lambasted her by describing her as being "not very bright or talented", although he worked with her again on Flawless in 2008. At the same time, she produced and starred in a TV miniseries called If These Walls Could Talk, written by Nancy Savoca. A three-part series on abortion, Savoca directed two segments, including the one in which Moore played a single woman in the 1950s seeking a back-alley abortion. She was nominated for a Golden Globe for Best Actress for that role.
Read More: http://en.wikipedia.org/wiki/Demi_Moore
========================================
VIDEO: Demi Moore Tribute
http://www.youtube.com/watch?v=lRQl2MjLKTs
==================================================
Featured Icons