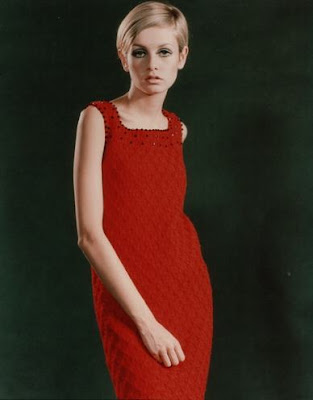 Lesley Lawson née Hornby (born September 19, 1949) known as Twiggy is an English model, actress, and singer. In the early-1960s she became a prominent British teenage model of swinging sixties London with others such as Penelope Tree.
Twiggy was initially known for her androgynous looks, large eyes, long eyelashes, thin build, and short hair. In 1966, she was named “The Face of 1966” by the Daily Express and voted British Woman of the Year. By 1967, Twiggy had modelled in France, Japan, and the U.S., and landed on the covers of Vogue and The Tatler. Her fame had spread worldwide.
After modelling, Twiggy went on to enjoy a successful career as a screen, stage, and television actress. She has hosted her own series, Twiggy's People, in which she interviewed celebrities, and also appeared as a judge on the reality show America's Next Top Model. Her 1998 autobiography, Twiggy in Black and White, entered the bestseller lists. Since 2005, she has modelled for Marks and Spencer, most recently to promote their recent rebranding, appearing in TV adverts and print media, alongside Myleene Klass, Erin O'Connor, Lily Cole and others.
Twiggy is best remembered as one of the first international supermodels and a fashion icon of the 1960s. Her greatest influence is Jean Shrimpton, whom Twiggy considers to be the world's first supermodel. Twiggy has also been described as the successor to Jean Shrimpton. In January 1966, young Lesley Hornby had her hair colored and cut short in Mayfair at The House of Leonard, owned by celebrity hairdresser Leonard. The hair stylist was looking for models on whom to try out his new crop haircut and he styled her hair in preparation for a few test head shots. A professional photographer Barry Lategan took several photos for Leonard, which the hairdresser hung in his salon. Deidre McSharry, a fashion journalist from the Daily Express, saw the images and asked to meet the young girl. McSharry arranged to have more photos taken. A few weeks later the publication featured an article and images of Hornby, declaring her “The Face of ’66.” In it, the copy read: "The Cockney Kid with a face to launch a thousand shapes ... and she's only 16! - The Daily Express, 23 February 1966.
Hornby's career quickly took off. She was 5'6" tall (short for a model), weighed a mere 6½ stone (41 kg, 91 lbs) and had a 31-22-32 figure, "with a new kind of streamlined, androgynous sex appeal." Her hairdresser boyfriend, Nigel Davies, became her manager, changed his name to Justin de Villeneuve, and persuaded her to change her name to Twiggy (from “Twigs”, her childhood nickname[citation needed]). De Villeneuve credits himself for Twiggy’s discovery and her modelling success, and his version of events is often quoted in other biographies. Ten years her senior, he managed her lucrative career for seven years, overseeing her finances and enterprises during her heyday as a model.
Twiggy was soon seen in all the leading fashion magazines, commanding fees of £80 an hour, bringing out her own line of clothes called “Twiggy Dresses” in 1967, and taking the fashion world by storm. “I hated what I looked like,” she said once, “so I thought everyone had gone stark raving mad.” Twiggy’s look centered on three qualities: her stick thin figure, a boyishly short haircut and strikingly dark eyelashes. Describing how she obtained her prominent eyelashes, now known as Twiggys, she said, “Back then I was layering three pairs of false eyelashes over my own and would paint extra ‘twigs’ on my skin underneath.”
One month after the Daily Express article, Twiggy posed for her first shoot for Vogue. A year later, she had appeared in 13 separate fashion shoots in international Vogue editions.
Read More: http://en.wikipedia.org/wiki/Twiggy
=====================================
VIDEO: Twiggy – Tribute - 60s supermodel Twiggy Lawson! SONG: Headlock - Imogen Heap - http://www.youtube.com/watch?v=2Z5qsI0Tyhc