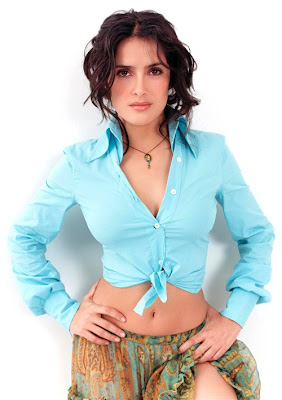 Salma Valgarma Hayek Jiménez de Pinault (Spanish pronunciation: [ˈsalma ˈxaʝek]; born September 2, 1966) is a Mexican film actress, director and producer. She received an Oscar nomination for Best Actress for her role as Frida Kahlo in the film Frida.
Hayek moved to Los Angeles, California in 1991 to study acting under Stella Adler. She had limited fluency in English, which was attributed to her suffering from dyslexia. Robert Rodriguez and his producer and then wife Elizabeth Avellan soon gave Hayek a starring role opposite Antonio Banderas in 1995's Desperado.
Hayek had a starring part opposite Matthew Perry in the 1997 romantic comedy Fools Rush In. She followed her role in Desperado with a brief role as a vampire queen in From Dusk Till Dawn, in which she performed a table-top snake dance. In 1999, she co-starred in Will Smith's big-budget Wild Wild West, and played a supporting role in Kevin Smith's Dogma. In 2000, Hayek had an uncredited acting part opposite Benicio del Toro in Traffic. In 2003, she reprised her role from Desperado by appearing in Once Upon a Time in Mexico, the final film of the Mariachi Trilogy.
Around 2000, Hayek founded film production company Ventanarosa, through which she produces film and television projects. Her first feature as a producer was 1999's El Coronel No Tiene Quien Le Escriba, Mexico's official selection for submission for Best Foreign Film at the Oscars.
Frida, co-produced by Hayek, was released in 2002. Starring Hayek as Frida Kahlo, and Alfred Molina as her unfaithful husband, Diego Rivera, the film was directed by Julie Taymor and featured an entourage of stars in supporting and minor roles (Valeria Golino, Ashley Judd, Edward Norton, Geoffrey Rush) and cameos (Antonio Banderas). She earned a Best Actress Academy Award nomination for her performance.
In the Time of the Butterflies is a 2001 feature film based on the Julia Álvarez book of the same name, covering the lives of the Mirabal sisters. In the movie, Salma Hayek plays one of the sisters, Minerva, and Edward James Olmos plays the Dominican dictator Rafael Leónidas Trujillo whom the sisters opposed
Read More: http://en.wikipedia.org/wiki/Salma_Hayek
VIDEO: Salma Hayek – Tribute
http://www.youtube.com/watch?v=I0YsYxvFKXs
Featured Icons