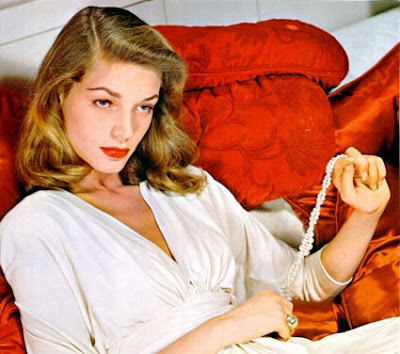 Lauren Bacall (born Betty Joan Perske, September 16, 1924) is an American film and stage actress and model, known for her distinctive husky voice and sultry looks.
She first emerged as leading lady in the Humphrey Bogart film "To Have And Have Not" (1944) and continued on in the film noir genre, including appearances in The Big Sleep (1946) and Dark Passage (1947), as well as a comedienne in How to Marry a Millionaire (1953) and Designing Woman (1957). Bacall has also worked in the Broadway musical, gaining Tony Awards for Applause in 1970 and Woman of the Year in 1981. Her performance in the movie The Mirror Has Two Faces (1996) earned her a Golden Globe Award and an Academy Award nomination.
In 1999, Bacall was ranked #20 of the 25 actresses on the AFI's 100 Years... 100 Stars list by the American Film Institute. In 2009, she was selected by the Academy of Motion Picture Arts and Sciences to receive an Academy Honorary Award at the inaugural Governors Awards.
Bacall took lessons at the American Academy of Dramatic Arts. During this time, she became a theatre usher and worked as a fashion model. As Betty Bacall, she made her acting debut, at age 17, on Broadway in 1942, as a walk-on in Johnny 2 X 4. According to her autobiography, she met her idol Bette Davis at Davis' hotel. Years later, Davis visited Bacall backstage to congratulate her on her performance in Applause, a musical based on Davis' turn in All About Eve.
Bacall became a part-time fashion model. Howard Hawks' wife Nancy spotted her on the March 1943 cover of Harper's Bazaar and urged Hawks to have her take a screen test for To Have and Have Not. Hawks invited her to Hollywood for the audition. He signed her up to a seven-year personal contract, brought her to Hollywood, gave her $100 a week, and began to manage her career. Hawks changed her name to Lauren Bacall. Nancy Hawks took Bacall under her wing. She dressed the newcomer stylishly, and guided her in matters of elegance, manners and taste. Bacall's voice was trained to be lower, more masculine and sexier, which resulted in one of the most distinctive voices in Hollywood. In the movie, Bacall takes on Nancy's nickname “Slim”.
Read More: http://en.wikipedia.org/wiki/Lauren_Bacall
======================================
VIDEO: Movie Legends - Lauren Bacall
http://www.youtube.com/watch?v=0Lo1-4EdP2A