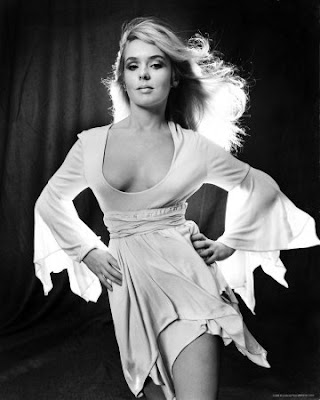 Joey Heatherton (born September 14, 1944) is an American actress, dancer, and singer.
Heatherton began her career as a child actress, appearing in 1959 as a member of the ensemble and an understudy in the original Broadway production of The Sound of Music, and received her first sustained national exposure that same year as a semi-regular on The Perry Como Show, playing an exuberant teenager with a perpetual crush on Perry Como. She also appeared extensively on The Dean Martin Show; Dean Martin invited her to perform numerous times on the show, starting with the premiere episode of September 16, 1965. From June to September 1968, along with Frank Sinatra, Jr., she co-hosted Martin's summer substitute musical comedy hour, Dean Martin Presents the Golddiggers. She also made multiple appearances on 1960s television shows such as The Andy Williams Show, The Hollywood Palace, The Ed Sullivan Show, and This is Tom Jones. She first appeared on television on her father's show The Merry Mailman, a popular children's show in New York.
In May 1969, she appeared on the Tonight Show, where she energetically coached Johnny Carson on the finer points of dancing "The Frug." During that era, she also appeared in Bob Hope's USO troupe between 1965 and 1977, entertaining the GIs with her singing, dancing and provocative outfits. Excerpts from the USO tours were televised as part of Hope's long-running series of NBC monthly specials, culminating in the top-rated Christmas shows, where Heatherton's segments were regularly featured.
Read More: http://en.wikipedia.org/wiki/Joey_Heatherton
VIDEO: Joey Heatherton - Sex Goddess of the 60s
http://www.youtube.com/watch?v=D7NSndc5488