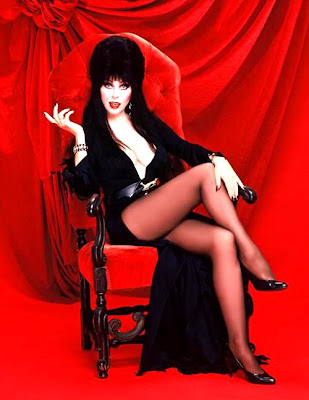 Cassandra Peterson (born September 17, 1951) is an American actress best known for her on-screen horror hostess character Elvira, Mistress of the Dark. She gained fame on Los Angeles television station KHJ wearing a black, gothic, cleavage-enhancing gown as host of Movie Macabre, a weekly horror movie presentation. Her wickedly vampish appearance is offset by her comical character, quirky/quick-witted personality, and valley girl-type speech.
In the late spring of 1981, five years after the death of Larry Vincent (who starred as host Sinister Seymour of a local Los Angeles weekend horror show called Fright Night), show producers began the task of bringing the show back. Deciding to use a female host, producers asked 1950s horror host Maila Nurmi to revive The Vampira Show. Nurmi worked on the project for a short time, but eventually quit when the producers would not hire Lola Falana to play Vampira. The station continued with the project and sent out a casting call. Peterson auditioned against 200 other horror hostess hopefuls, and won the role. Producers left it up to her to create the role's image. She and best friend Robert Redding came up with the sexy punk/vampire look after producers rejected her original idea to look like Sharon Tate in The Fearless Vampire Killers.
Unable to continue with the Vampira character, the name Elvira was chosen. What followed was Elvira's Movie Macabre featuring a quick-witted valley-girl type character named Elvira, Mistress of the Dark. With heavily-applied pancake horror make-up and a towering black beehive wig concealing her flame-red hair, the transformation from Cassandra Peterson to the sexy "Elvira" was so drastic that no one ever recognized her out of costume.
Shortly before the first taping, producers received a cease and desist letter from Nurmi. Besides the similarities in the format and costumes, Elvira's closing line for each show, wishing her audience "Unpleasant dreams," was notably similar to Vampira's closer: "Bad dreams, darlings..." uttered as she walked off down a misty corridor. The court ruled in favor of Peterson, holding that "'likeness' means actual representation of another person's appearance, and not simply close resemblance." Peterson claimed that Elvira was nothing like Vampira aside from the basic design of the black dress and black hair. Nurmi herself claimed that Vampira's image was based on Morticia Addams, a Charles Addams cartoon character from The Addams Family comic strip in The New Yorker magazine.
The Elvira character rapidly gained notoriety with her tight-fitting, low-cut black gown which showed more cleavage than had ever appeared on local Los Angeles television before. The movies featured on Elvira's Movie Macabre were always B grade (or lower). Elvira reclined on a red Victorian couch, introducing and often interrupting the movie to lampoon the actors, the script, and the bad editing. Adopting the flippant tone of a California valley-girl, she brought a satirical, sarcastic edge to her commentary without ever being crass or mean-spirited. Like a macabre Mae West, she reveled in dropping risqué double entendres as well as making frequent jokes about her eye-popping display of cleavage. In an AOL Entertainment News interview, Peterson revealed, "I figured out that Elvira is me when I was a teenager. She's a spastic girl. I just say what I feel and people seem to enjoy it." Her campy humor, obvious sex appeal, and good-natured self-mockery endeared her to late-night movie viewers as her popularity soared. At the same time, Elvira was embraced as an icon of the waning 1980s punk movement as well as the emerging Goth subculture.
Read More: http://en.wikipedia.org/wiki/Cassandra_Peterson
===============================
VIDEO: Elvira Tribute (Music: "Forever My Queen" by Pentagram)
http://www.youtube.com/watch?v=k6t3WHlCDKo