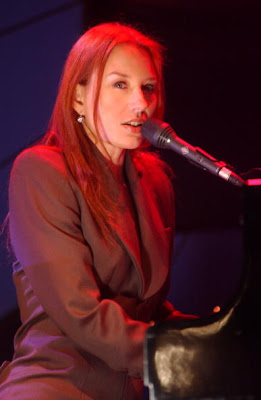 Tori Amos (born Myra Ellen Amos; August 22, 1963) is an American pianist, singer-songwriter and composer. She was at the forefront of a number of female singer-songwriters in the early 1990s and was noteworthy early in her career as one of the few alternative rock performers to use a piano as her primary instrument. Some of her charting singles include "Crucify", "Silent All These Years", "God", "Cornflake Girl", "Caught a Lite Sneeze", "Professional Widow", "Spark", "1000 Oceans", and "A Sorta Fairytale", her most commercially successful single in the U.S. to date.
As of 2005, Amos had sold 12 million albums worldwide. She has been nominated for 8 Grammy Awards. Amos was also named one of People Magazine's 50 Most Beautiful People in 1996. Amos has also been recognized as one of the top live acts of all time by a Rolling Stone poll in 2003, in which she placed at #5.
In 1986, Amos formed a music group, Y Kant Tori Read, the name of which was a reference to her days at the Peabody Conservatory, where she was able to play songs on her piano by ear, but was never successful at sight reading. In addition to Amos, the group was composed of Steve Caton (who would later play guitars on all her subsequent albums until 1999), drummer Matt Sorum, bass player Brad Cobb and, for a short time, keyboardist Jim Tauber. Following several phases of writing and recording, during which Amos has since asserted that the band lost their musical edge and direction due to interference from record executives, in July 1988, the Y Kant Tori Read's self-titled debut album was released. Although its producer, Joe Chiccarelli, has stated that Amos was very happy with the album at the time, it is now out of print and Amos has expressed no interest in reissuing it. Following the album's commercial failure and the group's subsequent disbanding, Amos began working with other artists (including Stan Ridgway, Sandra Bernhard, and Al Stewart) as a backup vocalist. She also recorded a song called "Distant Storm" for the film China O'Brien; in the credits, the song is attributed to a band called Tess Makes Good. It was the only song recorded by the band, and its only commercial release was in the film.
Despite the disappointing reaction to Y Kant Tori Read, Amos still had to comply with her six record contract with Atlantic Records, who in 1989 wanted a new record by March 1990. The initial recordings were declined by the label, which Amos felt was because the album had not been properly presented. The album was reworked and expanded under the guidance of Doug Morris and the musical talents of Steve Caton, Eric Rosse, Will MacGregor, Carlo Nuccio, and Dan Nebenzal, resulting in Little Earthquakes, an album recounting her religious upbringing, sexual awakening, struggle to establish her identity, and sexual assault.
Amos traveled to New Mexico with personal and professional partner Eric Rosse in 1993 to write and largely record her second solo record, Under the Pink. The album was received with mostly favorable reviews and sold enough copies to chart at #12 on the Billboard 200, a significantly higher position than the preceding album's position at #54 on the same chart
Read More: http://en.wikipedia.org/wiki/Tori_Amos
=======================================
VIDEO: Tori Amos - Caught a Lite Sneeze (live) (2003)
http://www.youtube.com/watch?v=llSEs07O4RU
==========================================
VIDEO: Tori Amos - A Sorta Fairytale (Soundstage, Live HD)
http://www.youtube.com/watch?v=TLZuR_-ZM_U
Featured Icons