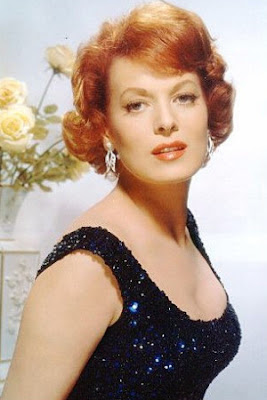 Maureen O'Hara (born August 17, 1920) is an Irish film actress and singer. The famously red-headed O'Hara has been noted for playing fiercely passionate heroines with a highly sensible attitude. She often worked with director John Ford and longtime friend John Wayne. Her autobiography, 'Tis Herself, was published in 2004 and was a New York Times Bestseller.
O'Hara was born as Maureen FitzSimons on Beechwood Avenue in the Dublin suburb of Ranelagh. She was the second oldest of the six children of Charles Stewart Parnell FitzSimons and Marguerita Lilburn FitzSimons. Her father was in the clothing business and also bought into Shamrock Rovers Football Club, a team O'Hara has supported since childhood. Her mother, a former operatic contralto, was a successful women's clothier. O'Hara was raised as, and still is, a Roman Catholic. Her siblings were Peggy, the oldest, and younger Charles, Florrie, Margot and Jimmy. Peggy dedicated her life to a religious order, the Sisters of Charity, and the younger children all went on to receive training at the Abbey Theatre and the Ena Mary Burke School of Drama and Elocution in Dublin. O'Hara's dream at this time was to be a stage actress. She was first educated at the John Street West Girls' School near Thomas Street in Dublin's Liberties Area. From the age of 6–17 she trained in drama, music and dance, and at the age of 10 joined the Rathmines Theatre Company and worked in amateur theatre in the evenings, after her lessons.
O'Hara's father was a very practical man and did not entirely support her theatrical aspirations. He insisted she learn a skill so that she would have something to fall back on to earn a living in case her experience in the performing arts was not successful. She enrolled in a business school and became a proficient bookkeeper and typist. Those skills proved helpful many years later when she was able to take and transcribe production notes dictated by John Ford for the screen adaptation of Maurice Walsh's short story The Quiet Man.
She did well in her Abbey training and was given an opportunity for a screen test in London. The studio adorned her in a "gold lamé dress with flapping sleeves like wings" and heavy make-up with an ornate hair style. Reportedly, her thoughts concerning the incident were, "If this is the movies, I want nothing to do with them!" The screen test was deemed to be far from satisfactory; however, actor Charles Laughton later saw the test and, despite the overdone makeup and costume, was intrigued, paying particular notice to her large and expressive eyes.
Laughton subsequently asked his business partner Erich Pommer to see the film clip. Pommer agreed with Laughton and O'Hara was offered an initial seven-year contract with their new company, Mayflower Pictures. Her first major film was Jamaica Inn (1939) directed by Alfred Hitchcock. Laughton was so pleased with O'Hara's performance that he cast her in the role of Esmeralda opposite him in The Hunchback of Notre Dame (1939), which was to be filmed at RKO Studios in Hollywood that same year. After the successful completion of Hunchback, World War II began, and Laughton, realizing their studio could no longer film in London, sold O'Hara's contract to RKO. That studio cast her in low-budget films until she was rescued by director John Ford, who cast her as Angharad in How Green Was My Valley, which won the 1941 Academy Award for Best Picture. Six years later, in 1947, she made what is perhaps her best-remembered film, starring as Doris Walker and the mother of a young Natalie Wood in 20th Century Fox's Miracle on 34th Street, which, despite being released in May, has become a perennial Christmas classic, with a traditional network television airing every Thanksgiving Day on NBC. The film also helped to further establish O'Hara's career after the film garnered several awards, including an Academy Award Nomination for Best Picture.
READ MORE: http://en.wikipedia.org/wiki/Maureen_O'Hara
========================================
VIDEO: Movie Legends - Maureen O'Hara
http://www.youtube.com/watch?v=k_ifhshTXj4
Featured Icons