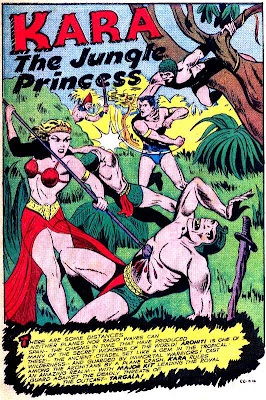 Kara, the Jungle Princess is a fictional character who appeared in EXCITING COMICS, which was published by a company known variously as Nedor, Better, or Standard. Her first appearance was in EXCITING COMICS #39, and her last appearance was in FIGHTING YANK #21.
Kara was originally the U.S. army nurse Lieutenant Jane Howell. She was on a plane piloted by Major Christopher "Kit" Walker when it crashed into a lake in the jungles of Nairobi. Jane and Kit survived the plunge and walked away away from the crash with the aid of some powder given to them by the shaman Baldayo. There, they met the Arohitians, a race of warriors who had been living peacefully in their kingdom under the lake while awaiting the return of their lost princess Kara, the only child of their deceased ruler. Jane, an exact double of the missing girl, was welcomed as Kara and was installed on the throne of Arohiti (the real Kara apparently having died long ago). Kit was made the commander of her guard and swore to protect Kara as long as she lived. Eventually, Kara used Baldayo's powder to make herself immortal, and they became occupied with keeping Targala, the exiled priest of the ape god Esh-Kar, away from their kingdom despite the fact that he wishes Kara would become his queen.
Read More: http://en.wikipedia.org/wiki/Kara,_the_Jungle_Princess
Classic Character Profiles Comic Art