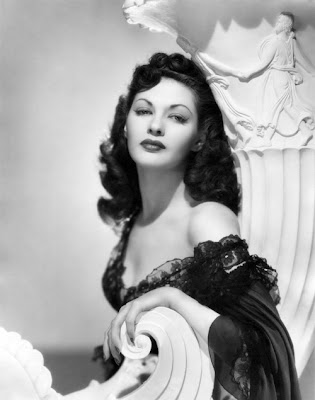 Yvonne De Carlo (September 1, 1922 – January 8, 2007) was a Canadian-born American actress of film and television. During her six-decade career, her most frequent appearances in film came in the 1940s and 1950s and included her best-known film roles, such as of Anna Marie in Salome Where She Danced (1945); Anna in Criss Cross (1949); Sephora the wife of Moses in The Ten Commandments (1956), starring Charlton Heston; and Amantha Starr in Band of Angels (1957) with Clark Gable. In the early 1960s, De Carlo accepted the offer to play Lily Munster for the CBS television series The Munsters, alongside Fred Gwynne and Al Lewis.
Her break came in 1945 playing the title role in Salome, Where She Danced. Though not a critical success, it was a box office favorite, and De Carlo was hailed as an up-and-coming star. Of the role, she was less sure, saying of her entrance, "I came through these beaded curtains, wearing a Japanese kimono and a Japanese headpiece, and then performed a Siamese dance. Nobody seemed to know quite why."
In 1947 she played her first leading role in Slave Girl and then in 1949 had her biggest success. As the female lead opposite Burt Lancaster in Criss Cross, she played a femme fatale, and her career began to ascend. She starred in the 1953 film The Captain's Paradise, as one of two wives a ship captain (Alec Guinness) keeps in separate ports. Cast in The Ten Commandments (1956) in a leading role as Sephora, Moses' wife (a role originally chosen for Anne Baxter), De Carlo became part of a major hit. The 1957 film Band of Angels featured her opposite Clark Gable in an American Civil War story, along with Sidney Poitier and Efrem Zimbalist, Jr. The actress worked steadily for the next several years, although many of the films failed to advance her career.
READ MORE: http://en.wikipedia.org/wiki/Yvonne_De_Carlo
VIDEO: Movie Legends - Yvonne De Carlo
http://www.youtube.com/watch?v=JKCydmgLjcQ
Featured Icons