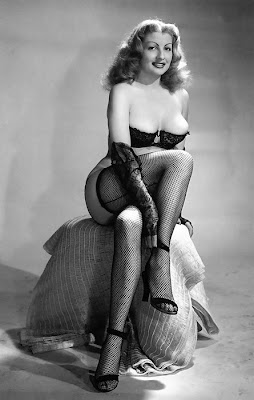 Tempest Storm (born February 29, 1928) is the stage name of an American stripper, burlesque star, and motion picture actress. Along with Lili St. Cyr and Blaze Starr, she was one of the best known burlesque performers of the 1950s and 1960s. She is regarded as having one of the longest careers as a burlesque performer, spanning more than 50 years. She still regularly performs as of the 2000s.
Storm was a regular performer for many years at the EL REY, a burlesque theater in Oakland, California, as well as at clubs around the United States, including in Las Vegas. She was famous for her physical measurements (44DD-25-35) and her naturally red hair. She was featured in numerous men's magazines and burlesque movies, including Russ Meyer's French Peep Show (1950), Paris After Midnight (1951), Striptease Girl (1952), Irving Klaw's Teaserama, (1955) (which also featured Bettie Page) and his Buxom Beautease (1956). She traveled extensively and did many performances in Las Vegas and Reno, Nevada.
In 1953 she moved to Portland, Oregon and worked at the Star Theater. A few months later she moved over to the Capital Theater down the street after her then-husband John Becker bought it. The owner of the Star then brought Becker's ex-wife, and rival burlesque star, Arabelle Andre to the Star to perform as "John's Other Wife". This sparked a "burlesque war" that made it into the pages of LIFE magazine on November 30, 1953.
In the late 1950s, her breasts - her "moneymakers" as she called them - were insured by Lloyds of London for one million dollars. She acted in several motion pictures both as herself and in a character role.
Read More: http://en.wikipedia.org/wiki/Tempest_Storm
============================
VIDEO: Bettie Page & Tempest Storm in Teaserama - Produced and Directed by Irving Klaw - http://www.youtube.com/watch?v=cVoPji_aOro
Featured Icons