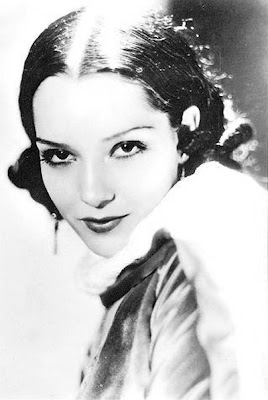 Lupe Vélez (July 18, 1908 – December 14, 1944) was a Mexican film actress. Vélez began her career in Mexico as a dancer, before moving to the U.S. where she worked in vaudeville. She was seen by Fanny Brice who promoted her, and Vélez soon entered films, making her first appearance in 1924. By the end of the decade she had progressed to leading roles. With the advent of talking pictures Vélez acted in comedies, but she became disappointed with her film career, and moved to New York where she worked in Broadway productions.
Returning to Hollywood in 1939, she made a series of comedies. She also made some films in Mexico. Vélez's personal life was often difficult; a five year marriage to Johnny Weissmuller and a series of romances, were highly publicized. She is often associated with the nicknames "The Mexican Spitfire" and "The Hot Pepper".
Vélez's first feature-length film was The Gaucho (1927) starring Douglas Fairbanks. The next year, she was named one of the WAMPAS Baby Stars, the young starlets deemed to be most promising for movie stardom. Most of her early films cast her in exotic or ethnic roles (Hispanic, Native American, French, Russian, even Asian). She worked under the direction of notable film directors like Victor Fleming in The Wolf Song (1929) opposite Gary Cooper; D.W Griffith in Lady of the Pavements (1928); Tod Browning in Where East is East opposite Lon Chaney and Cecil B. de Mille in The Squaw Man in 1931. By the end of the silent era the sparkling personality of Lupe rivalled that of the Flapper Girl, Clara Bow.
Within a few years Vélez found her niche in comedies, playing beautiful but volatile foils to comedy stars. Her slapstick battle with Laurel and Hardy in Hollywood Party and her dynamic presence opposite Jimmy Durante in Palooka (both 1934) are typically enthusiastic Vélez performances. She was featured in the final Wheeler & Woolsey comedy, High Flyers (1937), doing impersonations of Simone Simon, Dolores del Río, and Shirley Temple.
READ MORE: http://en.wikipedia.org/wiki/Lupe_Vélez
============================
VIDEO: Movie Legends - Lupe Vélez
http://www.youtube.com/watch?v=Raj-ka87UB0
Featured Icons