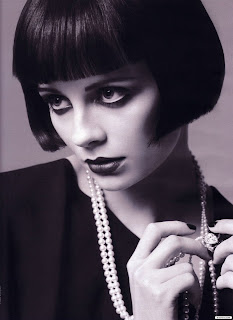 Mary Louise Brooks (November 14, 1906 – August 8, 1985), generally known by her stage name Louise Brooks, was an American dancer, model, showgirl and silent film actress, noted for popularizing the bobbed haircut. Brooks is best known for her three feature roles including two G. W. Pabst films: in Pandora's Box (1929), Diary of a Lost Girl (1929), and Prix de Beauté (Miss Europe) (1930). She starred in 17 silent films and, late in life, authored a memoir, Lulu in Hollywood.
Brooks made her screen debut in the silent The Street of Forgotten Men, in an uncredited role in 1925. Soon, however, she was playing the female lead in a number of silent light comedies and flapper films over the next few years, starring with Adolphe Menjou and W. C. Fields, among others.
She was noticed in Europe for her pivotal vamp role in the Howard Hawks directed silent "buddy film", A Girl in Every Port in 1928.
It has been said that her best American role was in one of the early sound film dramas, Beggars of Life (1928), as an abused country girl on the run with Richard Arlen and Wallace Beery playing hoboes she meets while riding the rails. Much of this film was shot on location, and the boom microphone was invented for this film by the director William Wellman, who needed it for one of the first experimental talking scenes in the movies. By this time in her life, she was mixing with the rich and famous, and was a regular guest of William Randolph Hearst and his mistress, Marion Davies, at San Simeon, being close friends with Davies' niece, Pepi Lederer. Her distinctive bob haircut, which became eponymous, and is still recognized to this day, helped start a trend; many women styled their hair in imitation of her and fellow film star Colleen Moore. Soon after the film Beggars Of Life was made, Brooks, who loathed the Hollywood "scene", refused to stay on at Paramount after being denied a promised raise, and left for Europe to make films for G. W. Pabst, the prominent German Expressionist director.
Read More: http://en.wikipedia.org/wiki/Louise_Brooks
================================
VIDEO: Louise Brooks Tribute
http://www.youtube.com/watch?v=jgRt_Hl_JeA
Featured Icons