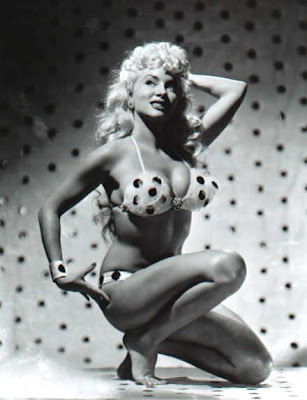 Columnist Walter Winchell called her "genuine Gee-whiz boy-bait."
When Esquire ran color pin-ups of her, the issue flew off the shelves.
Boys who made the trek to Broadway to see her flail the air with her long peroxide-blonde hair while dancing on the Winter Garden stage in Mike Todd's musical "Michael Todd's Peep Show" came away tight-trousered, bug-eyed, and happily slack-jawed. Critic John Chapman of the New York Daily News reviewed the production, praising Christine and the show's other pretty girls, but deploring Todd's vulgarity. His verdict: an embarrassingly dirty show. To Critic Chapman's annoyance, thick-skinned Producer Todd called up to thank him for a good box-office notice.
The show ran from June 28, 1950 to February 24, 1951, a total of 278 performances. Its popularity made Christine a hotter commodity on the dance circuit.
After "Peep Show," Christine appeared on the Great White Way once more, in 1956's "Strip For Action."
But in between, she danced ... mostly on New Orleans' Bourbon Street, where men in droves delighted in the mechanics of Christine's saucy jiggy in the more intimate setting of Leon Prima's 500 Club. The club was a premier showplace for sexy excess in a town known for all kinds of excess. The town on that twisty jog in the Big Muddy celebrated decadence and frivolity with glamor and class. 'Nawlins' jazzmen played raunchy and 'Nawlins' ladies danced raunchy, but it was raunch with impeccable style.
Lilly Christine, known in NOLA's burlesque houses and later in girlie mags like DARE and VUE as the "Cat Girl" for the feline-inspired way she purred, stalked, and slunk across a stage, was born Martha Theresa Pompender on December 17, 1923 in windswept Dunkirk, New York. Not much is known about her life in the westernmost town in New York State, or what a girl like her did on a Friday night on the frigid shores of Lake Erie.
Then she started appearing as uncredited eye candy in several movies — "Irish Eyes Are Smiling" (1944), "Two Guys from Milwaukee" (1946), "My Wild Irish Rose" (1947), and "Two Guys from Texas" (1948). She had only seconds of screen time, as a bauble on the arm of a C-list male star in a crowded nightclub scene, or as a comely cigarette girl.
With her film career going nowhere fast, she started dancing in men's clubs full time in 1948. She caught someone's eye, and made her Broadway debut in the 1950 Bert Lahr production "Burlesque."
READ MORE: http://amanoutoftime.livejournal.com/712350.html
===========================
VIDEO: The Cat Girl: Lilly Christine – Tribute
http://www.youtube.com/watch?v=UU-nTwppDvE
Featured Icons