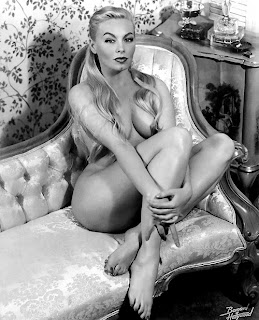 Lili St. Cyr (June 3, 1918 – January 29, 1999), was a prominent American burlesque stripper.
St. Cyr started her professional career as a chorus line dancer at the Florentine Gardens, in Hollywood. Two years later, her stripping debut was at the Music Box, in an Ivan Fehnova production. The producer had not even seen her perform—her striking looks were what won him over. The act was a disaster. Instead of firing her, Fehnova reconsidered and put together a new act. At the end of the dance, a stagehand would pull a fishing rod attached to St. Cyr's G-string. It would fly into the balcony and the lights would go dim. This famous act was known as "The Flying G", and such creative shows would be St. Cyr's trademark. Over the ensuing years and in a variety of different venues, many of St. Cyr's acts were memorable, with names like "The Wolf Woman", "Afternoon of a Faun", "The Ballet Dancer", "In a Persian Harem", "The Chinese Virgin", as well as "Suicide" (where she tried to woo a straying lover by revealing her body), and "Jungle Goddess" (in which she appeared to make love to a parrot).
Lili St. Cyr received the title of the most famous woman in Montreal throughout the late 1940s into the 1950s. However, Quebec's Catholic clergy condemned her act, declaring that whenever she dances "the theater is made to stink with the foul odor of sexual frenzy." The clergy's outcry was echoed by the Public Morality Committee. St. Cyr was arrested and charged with behavior that was "immoral, obscene and indecent." She was acquitted but the public authorities eventually closed down the Gayety Theatre where she performed. In the 1980s, St. Cyr wrote a French autobiography, "Ma Vie de Stripteaseuse." In the book, she declared her appreciation for the Gayety Theatre and her love for the city of Montreal.
While performing at Ciro's in Hollywood (billed as the "Anatomic Bomb"), St. Cyr was taken to court by a customer who considered her act lewd and lascivious. In court, St. Cyr insisted to the jury that her act was refined and elegant. As St. Cyr pointed out, what she did was slip off her dress, try on a hat, slip off her brassiere (there was another underneath), slip into a négligée. Then, undressing discreetly behind her maid, she stepped into a bubble bath, splashed around, and emerged, more or less dressed. After her appearance as a witness, as a newspaper account of the time put it, "The defense rested, as did everyone else." St. Cyr was acquitted.
While St. Cyr starred in several movies, an acting career never really materialized. In 1955, with the help of Howard Hughes, St. Cyr landed her first acting job in a major motion picture in the Son of Sinbad. The film, described by one critic as "a voyeur's delight", has St. Cyr as a principal member of a Baghdad harem populated with dozens of nubile starlets. The film was condemned by the Catholic Legion of Decency. St. Cyr also had a role in the movie version of Norman Mailer's The Naked and the Dead in 1958. In this film, St. Cyr plays 'Jersey Lili', a stripper in a Honolulu night-club and girlfriend of a soldier who boasts to his pals that he has her picture painted inside his groundsheet. Regrettably, heavy edits of St. Cyr's night-club routine by censors result in some choppy editing in an otherwise finely crafted film. But St. Cyr's movie career was short lived, and typically she settled for playing a secondary role as a stripper, or playing herself. Her dancing is featured prominently in two Irving Klaw films, Varietease and Teaserama.
St. Cyr was also known for her pin-up photography, especially for photos taken by Bruno Bernard, known professionally as "Bernard of Hollywood", a premier glamor photographer of Hollywood's Golden Era. Bernard said that she was his favorite model and referred to her as his muse.
Read More: http://en.wikipedia.org/wiki/Lili_St._Cyr
=======================================
VIDEO: Lili St.Cyr Tribute - You Give Me Fever
http://www.youtube.com/watch?v=4iXP-eiqI70
Featured Icons