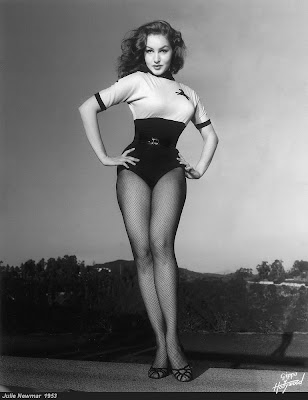 Julie Newmar (born Julia Chalene Newmeyer on August 16, 1933) is an American actress, dancer and singer. Her most famous role is that of Catwoman in the Batman television series.
Her first major role, billed as "Julie Newmeyer", was as "Dorcas", one of the brides in Seven Brides for Seven Brothers (1954). Her three minute Broadway appearance as the leggy "Stupefyin' Jones" in the musical Li'l Abner in 1956 led to a reprise in the 1959 film version. She was also the female lead in a low-budget comedy, The Rookie. She also featured in many further films including the 1969 production, Mackenna's Gold.
Newmar had first appeared on Broadway in 1955 in Silk Stockings which starred Hildegarde Neff and Don Ameche. She also appeared in the 1961 play, The Marriage-Go-Round, which starred Charles Boyer and Claudette Colbert. Newmar developed the role of the Swedish vixen and won a Tony Award for Best Supporting Actress. She later appeared on stage with Joel Grey in the national tour of Stop the World - I Want to Get Off and as "Lola" in Damn Yankees! and "Irma" in Irma La Douce.
Newmar appeared in a pictorial, in the May 1968 issue of Playboy magazine, which featured Playmate Elizabeth Jordan.
Newmar's fame stems mainly from her television appearances. Her statuesque form made her a larger than life sex symbol, most often cast as a temptress or amazonian beauty, including an early appearance in sexy maid costume for the Phil Silvers Show, later known as Sgt. Bilko. She starred as "Rhoda the Robot" in the TV series My Living Doll (1964–1965), and is known for her recurring role in the 1960s TV series Batman as the Catwoman, the "purrfect" villainess. (Lee Meriwether played Catwoman in the 1966 feature film and Eartha Kitt in the series' final season.) Newmar made her own Catwoman costume—now in the Smithsonian Institution—and placed the belt at the hips instead of the waist to emphasize her hourglass figure.
READ MORE: http://en.wikipedia.org/wiki/Julie_Newmar
VIDEO: Julie Newmar – Tribute (Sex Bomb)
http://www.youtube.com/watch?v=K-ambmfMryM
Featured Icons