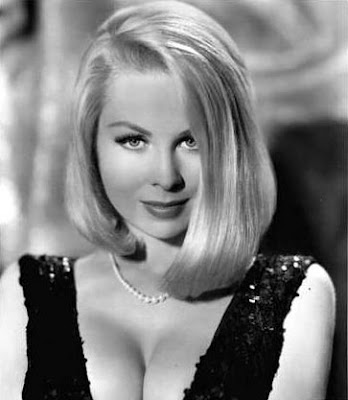 Joi Lansing (April 6, 1929 - August 7, 1972) was a model, film and television actress, and nightclub singer.
Lansing's film career began in 1948, and, in 1952, she played an uncredited role in MGM's Singin' in the Rain. She received top billing in Hot Cars (1956). In the opening sequence of Orson Welles's Touch of Evil (1958), she appeared as Zita, the dancer who dies at the end of the famous first tracking shot, during which her character exclaims to a border guard, "I keep hearing this ticking noise inside my head!"
Lansing had a brief role as an astronaut's girlfriend in the 1958 sci-fi classic Queen of Outer Space. During the 1950s, she starred in short musical films for the Scopitone video-jukebox system. Her songs included "The Web of Love" and "The Silencers".
Though Lansing was a rival to Jayne Mansfield and Mamie Van Doren, she hardly ever had the lead role in any movie. Most of her early roles were uncredited ones and some of her later roles were uncredited ones also. She is considered a character actress rather than a leading lady.
In the 1964, producer Stanley Todd discussed a film project with Lansing tentatively titled Project 22 with location shooting planned in Yugoslavia and George Hamilton and Geraldine Chaplin named to the cast. The movie was never made.
Lansing played "Lola" in Marriage on the Rocks (1965) with a cast that included Frank Sinatra, Deborah Kerr, and Dean Martin. She had previously appeared in Sinatra's film A Hole in the Head and in Martin's comedy Who Was That Lady?
Her last film was Bigfoot (1970).
READ MORE: http://en.wikipedia.org/wiki/Joi_Lansing
=======================
VIDEO: Joi Lansing Tribute
http://www.youtube.com/watch?v=gJqPfbHpQe0
Featured Icons