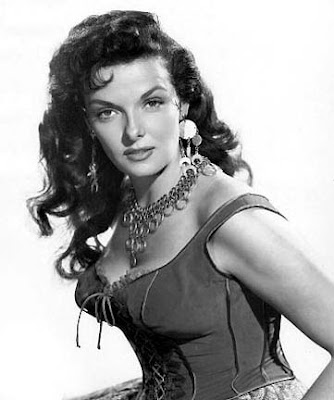 Jane Russell (born June 21, 1921 - February 28, 2011) was an American film actress remembered best for her performance alongside Marilyn Monroe in Gentlemen Prefer Blondes. Russell was one of Hollywood's leading sex symbols in the 1940s and 1950s.
Russell's mother arranged for her to take piano lessons. In addition to music, she was interested in drama and participated in stage productions at Van Nuys High School. Her early ambition was to be a designer of some kind, until the death of her father at forty-six, when she decided to work as a receptionist after graduation. She also modeled for photographers and, at the urging of her mother, studied drama and acting with Max Reinhardt's Theatrical Workshop and with famed Russian actress Maria Ouspenskaya.
In 1940, Russell was signed to a seven-year contract by film mogul Howard Hughes and made her motion picture debut in The Outlaw (1943), a story about Billy the Kid that went to great lengths to showcase her voluptuous figure. Although the movie was completed in 1941, it was released for a limited showing two years later. There were problems with the censorship of the production code over the way her ample cleavage was displayed. When the movie was finally passed, it had a general release in 1946. During that time, she was kept busy doing publicity and became known nationally. Contrary to countless incorrect reports in the media since the release of The Outlaw, Russell did not wear the specially designed underwire bra (the first of its kind) that Howard Hughes constructed for the film. According to Jane's 1988 autobiography, she was given the bra, decided it had a mediocre fit, and wore her own bra on the film set with the straps pulled down.
READ MORE: http://en.wikipedia.org/wiki/Jane_Russell
-------------------------------------------------
VIDEO: Movie Legends - Jane Russell
http://www.youtube.com/watch?v=CS7A1vrQ_Xk
Featured Icons