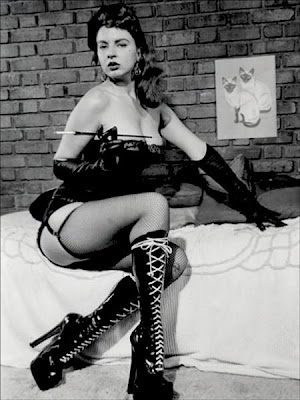 In the back pages of various men's magazines during the 1950's and 60's you would see countless ads for 8 mm loops or photo sets that would come to you door in plain brown envelopes. These were the sets that were more daring and leaned more toward S&M and fetish shots.
One of the best known photographer and distributor of these kinds of photos was Irving Klaw. Klaw was the same man who fed a hungry male populous a steady diet of photos featuring Bettie Page, Lili St. Cyr, Tempest Storm, Blaze Starr, and the like. If the model wasn't a burlesque dancer, then Klaw usual posed them as the classic "kitten-with-a-whip". Tamer than his out-and-out bondage photos, this persona had just enough female domination to satisfy those who were tired of the run-of-the-mill blonde bombshell. Redhead Jackie Miller, with her impressive 5' 11'' 40-26-38 figure, fit Klaw's fetish role perfectly.  She could give you a charming smile one minute, and the next hit you with a coquettish pout.