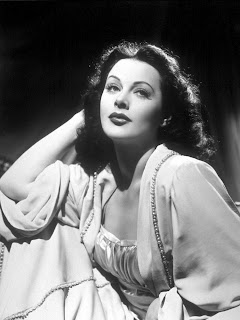 Hedy Lamarr (November 9, 1913 – January 19, 2000) was an Austrian-American actress known primarily for her extraordinary beauty and her celebrity in a film career as a major contract star of MGM's "Golden Age".
However, Lamarr was also an inventor and mathematician who co-invented -- with composer George Antheil -- an early technique for spread spectrum communications and frequency hopping, necessary to wireless communication from the pre-computer age to the present day.
In early 1933 she starred in Gustav Machatý's notorious film Ecstasy, a Czechoslovak film made in Prague, in which she played the love-hungry young wife of an indifferent old husband. Closeups of her face and long shots of her running nude through the woods gave the film notoriety. It was nearly another thirty years before nudity became common in mainstream cinema.
On August 10, 1933 she married Friedrich Mandl, a Vienna-based arms manufacturer 13 years her senior. In her autobiography Ecstasy and Me, Lamarr described Mandl as an extremely controlling man who sometimes tried to keep her shut up in their mansion. The Austrian bought as many copies of Ecstasy as he could possibly find, objecting to her in the film, and "the expression on her face" (Lamarr later claimed the looks of passion were the result of the director poking her in the bottom with a safety pin).
Mandl prevented her from pursuing her acting career, and instead took her to meetings with technicians and business partners. In these meetings, the mathematically talented Lamarr learned about military technology. Otherwise she had to stay at the castle Schloss Schwarzenau. She later related that, even though Mandl was part-Jewish, he was consorting with Nazi industrialists, which infuriated her. In Ecstasy and Me, Lamarr wrote that dictators Benito Mussolini and Adolf Hitler both attended Mandl's grand parties. She related that in 1937 she disguised herself as one of her maids and fled to Paris, where she obtained a divorce, and then moved on to London. According to another version of the episode, she persuaded Mandl to allow her to attend a party wearing all her expensive jewelry, later drugged him with the help of her maid, and made her escape out of the country with the jewelry.
Read More: http://en.wikipedia.org/wiki/Hedy_Lamarr
==================================
VIDEO: Movie Legends - Hedy Lamarr
http://www.youtube.com/watch?v=YAuXz0prMYw
Featured Icons