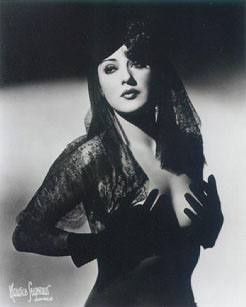 Gypsy Rose Lee (January 8, 1911 – April 26, 1970) was an American burlesque entertainer, famous for her striptease act. She was also an actress, author and playwright, whose 1957 memoir was made into the stage musical and film Gypsy.
Gypsy Rose Lee was born Rose Louise Hovick in Seattle, Washington in 1911, although her mother later shaved three years off both of her daughters' ages. She was initially known by her middle name, Louise. Her mother, Rose Hovick (née Rose Evangeline Thompson), was a teenage bride fresh from a convent school when she married Norwegian-American John Olaf Hovick, who was a newspaper advertising salesman and a reporter at The Seattle Times. Louise's sister, Ellen June Hovick (better known as actress June Havoc), was born in 1913
Louise's singing and dancing talents were insufficient to sustain the act without June. Eventually, it became apparent that Louise could make money in burlesque, which earned her legendary status as a classy and witty strip tease artist. Initially, her act was propelled forward when a shoulder strap on one of her gowns gave way, causing her dress to fall to her feet despite her efforts to cover herself; encouraged by the audience response, she went on to make the trick the focus of her performance. Her innovations were an almost casual strip style, compared to the herky-jerky styles of most burlesque strippers (she emphasized the "tease" in "striptease") and she brought a sharp sense of humor into her act as well. She became as famous for her onstage wit as for her strip style, and—changing her stage name to Gypsy Rose Lee—she became one of the biggest stars of Minsky's Burlesque, where she performed for four years. She was frequently arrested in raids on the Minsky brothers' shows.
She eventually traveled to Hollywood, where she was billed as Louise Hovick. Her acting was generally panned, so she returned to New York City and invested in film producer Michael Todd. She eventually appeared as an actress in many of his films.
Trying to describe what Gypsy was (a "high-class" stripper), H. L. Mencken coined the term ecdysiast. Her style of intellectual recitation while stripping was spoofed in the number "Zip!" from Rodgers and Hart's Pal Joey, a play in which her sister June appeared. Gypsy can be seen performing an abbreviated version of her act (intellectual recitation and all) in the 1943 film Stage Door Canteen.
In 1941, Gypsy Rose Lee authored a mystery thriller called The G-String Murders which was made into the 1943 film Lady of Burlesque starring Barbara Stanwyck. While some assert this was in fact ghost-written by Craig Rice, there are also those who suggest that there is more than sufficient written evidence in the form of manuscripts and Lee's own correspondence to prove she wrote a large part of the novel herself under the guidance of Rice and others, including her friend and mentor, the editor George Davis. Lee's second murder mystery, Mother Finds a Body, was published in 1942.
Read More: http://en.wikipedia.org/wiki/Gypsy_Rose_Lee
===========================================
VIDEO: Gypsy "Origional Burlesque Star "
http://www.youtube.com/watch?v=K_9p1_Zdkxg
=================================================