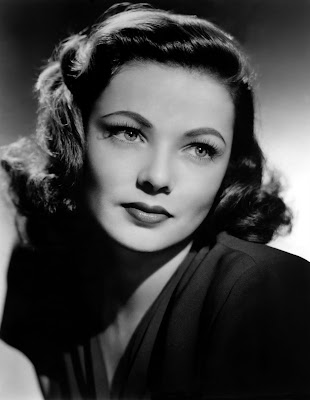 Gene Eliza Tierney (November 19, 1920 – November 6, 1991) was an American film and stage actress. Acclaimed as one of the great beauties of her day, she is best remembered for her performance in the title role of Laura (1944) and her Academy Award-nominated performance for Best Actress in Leave Her to Heaven (1945).
Other notable roles include Martha Strable Van Cleve in Heaven Can Wait (1943), Isabel Bradley Maturin in The Razor's Edge (1946), Lucy Muir in The Ghost and Mrs. Muir (1947), Ann Sutton in Whirlpool (1949), Maggie Carleton McNulty in The Mating Season (1951) and Anne Scott in The Left Hand of God (1955). Certain of her film-related material and personal papers are contained in the Wesleyan University Cinema Archives, to which scholars and media experts from around the world may have full access.
Tierney’s motion picture debut was in a supporting role as Elenore Stone in Fritz Lang's western The Return of Frank James (1940), opposite Henry Fonda. A small role as Barbara Hall followed in Hudson's Bay (1941) with Paul Muni.
Also, in 1941, Tierney co-starred as Ellie Mae Lester in John Ford's comedy Tobacco Road, along with the title role in Belle Starr, Zia in Sundown and Victoria Charteris a.k.a. Poppy Smith in The Shanghai Gesture. The following year, she played Eve in Son of Fury: The Story of Benjamin Blake, along with the dual role as Susan Miller a.k.a. Linda Worthington in Rouben Mamoulian's screwball comedy film Rings on Her Fingers, Kay Saunders in Thunder Birds and Miss Young in China Girl.
Top billing in Ernst Lubitsch's classic 1943 comedy Heaven Can Wait as Martha Strable Van Cleve signaled an upward turn in Tierney's career, as her popularity increased. Tierney recalled during the production of Heaven Can Wait, "Lubitsch was a tyrant on the set, the most demanding of directors. After one scene, which took from noon until five to get, I was almost in tears from listening to Lubitsch shout at me. The next day I sought him out, looked him in the eye, and said, 'Mr. Lubitsch, I'm willing to do my best but I just can't go on working on this picture if you're going to keep shouting at me.' 'I'm paid to shout at you', he bellowed. 'Yes', I said, 'and I'm paid to take it — but not enough.' After a tense pause, Lubitsch broke out laughing. From then on we got along famously." In 1944, she starred in what became her most famous role: the intended murder victim, Laura Hunt, in Otto Preminger's film noir Laura, opposite Dana Andrews. After playing Tina Tomasino in A Bell for Adano (1945), she played the jealous, narcissistic femme fatale Ellen Berent Harland, opposite Cornel Wilde, in the film version of the best-selling Ben Ames Williams novel Leave Her to Heaven, a performance that won her an Academy Award nomination for Best Actress (1945). Leave Her To Heaven was 20th Century-Fox's most successful film of the 1940s.
Read More: http://en.wikipedia.org/wiki/Gene_Tierney
VIDEO: Movie Legends - Gene Tierney
http://www.youtube.com/watch?v=HlwiD2STCrs
Featured Icons