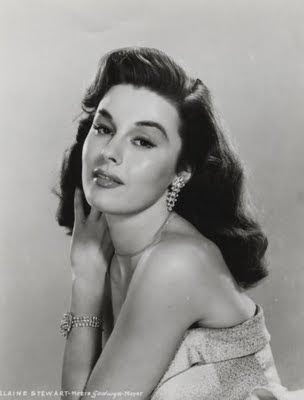 Elaine Stewart (May 31, 1930 – June 27, 2011) was an American actress and model.
Stewart made her debut by winning Miss See in See Magazine in 1952, with measurements 34-25-36. She was in many magazines such as Playboy and Photoplay.
She had a supporting role in The Bad and the Beautiful (1952), as Laila. She appeared in other films, such as Brigadoon, Night Passage and The Adventures of Hajji Baba.
She is also known as the co-hostess on two 1970s game shows, Gambit with Wink Martindale and the nighttime edition of High Rollers with Alex Trebek, both produced by her husband.
Read More: http://en.wikipedia.org/wiki/Elaine_Stewart
=======================================
Featured Icons