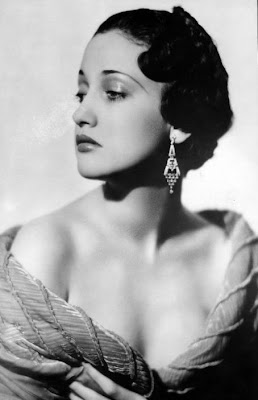 Dorothy Lamour (December 10, 1914 – September 22, 1996) was an American film actress. She is best-remembered for appearing in the Road to... movies, a series of successful comedies co-starring Bob Hope and Bing Crosby

In 1936, she moved to Hollywood and began appearing regularly in films for Paramount Pictures. The role that made her a star was Ulah (a sort of female Tarzan) in The Jungle Princess (1936). She wore a sarong, which would become associated with her. While she first achieved stardom as a sex symbol, Lamour also showed talent as both a comic and dramatic actress. She was among the most popular actresses in motion pictures from 1936 to 1952.
She starred in the "Road to..." movie series with Bing Crosby and Bob Hope in the 1940s and 1950s. The movies were enormously popular during the 1940s, and they regularly placed among the top moneymaking films each year. While the films centered more on Hope and Crosby, Lamour held her own as their "straight man", looked beautiful, and sang some of her most popular songs. Her contribution to the films was considered by the public and theater owners of equal importance to that of Crosby and Hope during the series' golden era, 1940-1952. The series essentially ended with the release of Road to Bali in 1952, with her career declining while co-stars Hope and Crosby remained major show business figures.
During the World War II years, Lamour was among the most popular pinup girls among American servicemen, along with Betty Grable, Rita Hayworth, Lana Turner and Veronica Lake. Lamour was also largely responsible for starting up the war bond tours in which movie stars would travel the country selling U.S. government bonds to the public. Lamour alone promoted the sale of over $21 million dollars worth of war bonds, and other stars promoted the sale of a billion more.
Read More: http://en.wikipedia.org/wiki/Dorothy_Lamour
==========================
VIDEO: Movie Legends - Dorothy Lamour
http://www.youtube.com/watch?v=VJyq-1SMS6U
Featured Icons