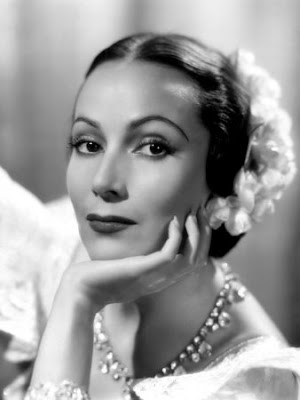 Dolores del Río (August 3, 1904 – April 11, 1983) was a Mexican film actress. She was a star of Hollywood films during the silent era and in the Golden Age of Hollywood. Later in life, she became an important actress in Mexican films. She was generally thought to be one of the most beautiful actresses of her era, and was the first Latin American movie star to have international appeal.
In the Silent film era, Del Rio was considered a counterpart to Rudolph Valentino. With the arrival of the talkies, she became one of the principal Art Deco symbols of beauty. Del Río was one of the principal stars of Mexican films during the Golden Age of Mexican cinema in the 1940s and 1950s. She was frequently called the "Princess of México".
In 1930, she married Cedric Gibbons, one of MGM's leading art directors and production designers, whom she met at a party organized by William Randolph Hearst and Marion Davies at Hearst Castle. Her presence in Hollywood of the thirties is not just limited to the world of cinema, also the high society circles. The Gibbons-Del Río house in Hollywood was a frequent meeting place from personalities like Greta Garbo, Marlene Dietrich, Errol Flynn, Lili Damita, Clark Gable and many more.
With the advent of talkies, she was relegated to exotic and unimportant roles. The Hollywood executives sought "do not talk too much at her movies", because of her Latin accent. She scored successes with Bird of Paradise (1932), directed by King Vidor. The film was produced by David O. Selznick that request the script to King Vidor and say: "I want Del Rio in a love story in the South Seas. I don't care the script, but in the end, Del Rio should be thrown into a volcano". The film scandalized audiences when she took a naked swim with Joel McCrea. This film was made before the Hays Code was enacted so nudity could be shown. Next she filmed Flying Down to Rio (the film that first paired Fred Astaire and Ginger Rogers) (1933); Madame Du Barry (1934) and Wonder Bar (1934).
Later, del Rio starred in the Busby Berkeley comedies In Caliente (1935) and I Live for Love (1935), but she refused to participate in the film Viva Villa! (Fay Wray took her place). Dolores described the film as an "Anti-Mexican movie".
In 1934, Dolores del Río was one of the victims of the "open season" of the "reds" in Hollywood. With James Cagney, Ramón Novarro and Lupe Vélez, she was accused of promoting communism in California. Twenty years later this would have consequences on her career.
In the late thirties, del Río's career declined. With the support of Warner Bros. she made a series of police films (such as Lancer Spy in 1937 and International Settlement in 1938). But del Río's career in the later 1930s unfortunately suffered from too many exotic, two-dimensional roles designed with Hollywood's cliched ideas of ethnic minorities in mind. She was marked as "box office poison" by exhibitors, along with actresses such as Katharine Hepburn, Mae West, Marlene Dietrich and Joan Crawford.
In 1940, Dolores met Orson Welles, who at that time was new to Hollywood. Feeling a mutual attraction, the couple began a romance. Welles fell madly in love with her. Reportedly, the affair was the cause of her divorce from Gibbons in 1941. Dolores del Río was with Welles for two years, during which he was at the peak of his career. She was at his side during the filming of Citizen Kane, and during the attacks of Randolph Hearst against him. Welles initially directed del Río in the Mexican film Santa, but the project was cancelled.[9] The film directed by Norman Foster was realized later by the Mexican actress Esther Fernández.
Dolores also accompanied Welles in vaudeville shows across the United States. She collaborated with Welles in the film Journey into Fear in 1942. After Welles broke from RKO, del Río sympathized with him, though her character (a sexy leopard-woman) in the film, was reduced.
READ MORE: http://en.wikipedia.org/wiki/Dolores_del_Río
=============================================
VIDEO: Movie Legends - Dolores Del Rio
http://www.youtube.com/watch?v=l4dZETjQveM
Featured Icons