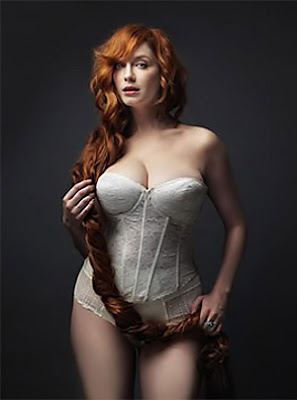 Christina Rene Hendricks (born May 3, 1975) is an American actress known for her role as Joan Holloway in the AMC cable television series Mad Men, and as Saffron in Fox's short-lived series Firefly. Hendricks was named "the sexiest woman in the world" in 2010 in a poll of female readers taken by Esquire magazine.
Hendricks has made a number of guest television appearances, starting as a regular in the series Beggars and Choosers. Since then, she has starred in the series The Big Time and The Court, opposite Sally Field and Craig Bierko, as well as the legal drama Kevin Hill. She has also had recurring roles in ER and Firefly and guest-starred in episodes of Angel, Miss Match, Tru Calling, Presidio Med, Without a Trace, and Las Vegas. Hendricks starred opposite Kip Pardue in South of Pico. La Cucina, an award-winning indie film, premiered on Showtime in December 2009 and stars Hendricks as a sexy writer opposite Joaquim de Almeida. She has appeared in four episodes of the NBC TV show Life in the recurring role of Olivia, detective Charlie Crews' soon-to-be stepmother and Ted Earley's love interest. She also starred in music videos for "The Ghost Inside" by Broken Bells, and Everclear's "One Hit Wonder".
Her best-known role is that of Joan Holloway on the award-winning AMC series Mad Men. Hendricks' character is the office manager of advertising agency Sterling Cooper Draper Pryce (SCDP), providing mentoring to a group of women who must deal with the come-ons and callousness of professional advertising executives.
READ MORE: http://en.wikipedia.org/wiki/Christina_Hendricks
=====================================
VIDEO: Christina Hendricks – Video Tribute
http://www.youtube.com/watch?v=zhKrUlu_P5s
Featured Icons