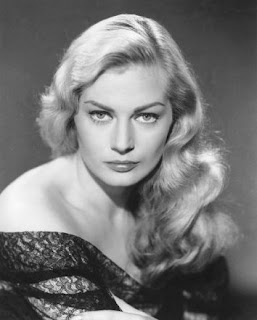 Kerstin Anita Marianne Ekberg (born September 29, 1931 in Malmö, Skåne) is a Swedish model, actress and cult sex symbol. She is best known for her role as Sylvia in the 1960 Federico Fellini film, La Dolce Vita, which features the legendary scene of her cavorting in Trevi Fountain alongside Marcello Mastroianni.

The combination of a colorful private life and physique gave her appeal to gossip magazines such as Confidential and to the new type of men's magazine that proliferated in the 1950s. She soon became a major 1950s pin-up. In addition, Ekberg participated in publicity stunts. Famously, she admitted that an incident where her dress burst open in the lobby of London's Berkeley Hotel was pre-arranged with a photographer.

By the mid-50s, other studios offered Ekberg work. Paramount Pictures and Frank Tashlin cast her in Hollywood or Bust (1956) and Artists and Models (1955) both starring Dean Martin and Jerry Lewis. Both films used her as a foil for many of the director's sight gags. Ekberg also played an Amazonian extraterrestrial in 1953's Abbott and Costello Go to Mars.
Read More: http://en.wikipedia.org/wiki/Anita_Ekberg
VIDEO: La Dolce Vita - Trevi Fountain Scene
http://www.youtube.com/watch?v=GKN1T3K1idg
Featured Icons