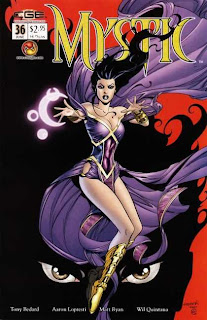 HOT DEALS LIST!
AVAILABLE NOW: Mystic – Crossgen Comics - 3-Book Set  with FREE Gift
ONLY: $14.99
Condition: Mint/NM
To order your set, click “Add To Cart” below and follow the instructions thereafter:
Includes Mystic #36, #37, #38
Mystic is a comic book that was published by the since-defunct, Florida-based CrossGen Comics. Created by writer Ron Marz and artists Brandon Peterson and John Dell, it was one of five flagship titles in the company's Sigilverse shared universe. Mystic ran for 43 issues (July 2000 - January 2004).
About The Series:
Set on the planet Ciress, in which sorcery is an apprenticed profession organized in guilds, the story centered on sisters Genevieve and Giselle. The former had devoted her life to becoming a top sorceress; the latter is a spoiled socialite who much against her wishes is granted great power and responsibility via a mysterious sigil.
Hot Deals - Comics and Collectibles