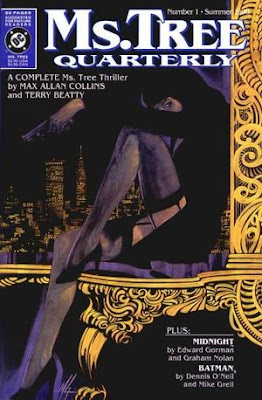 AVAILABLE NOW: Ms Tree Comic Book – 5-book set with FREE Gift – Condition: Mint/NM
ONLY: $14.99
To order your set, click “Add To Cart” below and follow the instructions thereafter:
Includes:
Ms. Tree #4 (Eclipse Comics)
Ms. Tree #5 (Eclipse Comics)
Ms. Tree’s Thrilling Detective #1 (Eclipse Comics)
Ms. Tree’s Thrilling Detective #2 (Eclipse Comics)
Ms. Tree Quarterly #1 (DC Comics)
The title character is Michael Tree, a female private detective who takes over her husband's investigation business when he is murdered. In her first case, she captures the murderer and discovers his link to the Muerta organized crime family.
Ms. Tree's dead husband was named Michael Tree, the joke being that after the marriage they had the same name. Series creator/writer Max Allan Collins makes no secret of the fact that Ms. Tree was inspired by Velda, Mike Hammer's secretary, a stacked, gun carrying, six-foot tall brunette and Mike's lover, who was almost as tough as he was. The basic premise of Ms. Tree was, "What if Velda and Mike Hammer eventually got married, and on their honeymoon he was murdered?"
Hot Deals - Comics and Collectibles