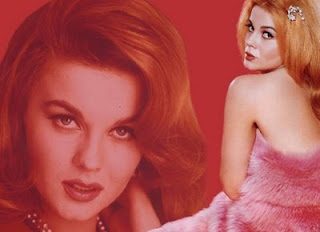 Ann-Margret Olsson (born April 28, 1941) is a Swedish-American actress, singer and dancer. She became famous for her starring roles in Bye, Bye Birdie, Viva Las Vegas, The Cincinnati Kid, Carnal Knowledge, and Tommy. Her later career includes character roles in Grumpy Old Men, Any Given Sunday, The Santa Clause 3, and The Break-Up. She has won five Golden Globe Awards and been nominated for two Academy Awards, two Grammy Awards, a Screen Actors Guild Award, and five Emmy Awards. On August 21, 2010, she won her first Emmy Award for her guest appearance on Law & Order: SVU.

In 1961, at nineteen, she filmed a screen test at 20th Century Fox and was signed to a seven-year contract. Ann-Margret made her film début in a loan out to United Artists in Pocketful of Miracles, with Bette Davis. It was a remake of the 1933 movie Lady for a Day. Both versions were directed by Frank Capra.

Then came a 1962 remake of Rodgers and Hammerstein's musical State Fair playing the "bad girl" role of Emily opposite Bobby Darin and Pat Boone. She had tested for the part of Margy, the "good girl," but she seemed too seductive to the studio bosses who decided on the switch. The two roles mimicked her real-life personality — shy and reserved off stage but wildly exuberant and sensuous on stage. As she summed up in her autobiography, she would easily transform herself from "Little Miss Lollipop to Sexpot-Banshee" once she stepped on stage and the music began.

Her next starring role, as the all-American teenager Kim from Sweet Apple, Ohio, in Bye Bye Birdie (1963) made her a major star. The premiere at Radio City Music Hall, 16 years after her first visit to the famed theater, was a smash hit—the highest first-week grossing film to date at that theater. Life magazine put her on the cover for the second time and announced that the "torrid dancing almost replaces the central heating in the theater". She was asked to sing "Baby, Won't You Please Come Home" at President John F. Kennedy's private birthday party at the Waldorf-Astoria, one year after Marilyn Monroe's famous "Happy Birthday". Ann-Margret met Elvis Presley on the MGM soundstage when the two filmed Viva Las Vegas (1964).