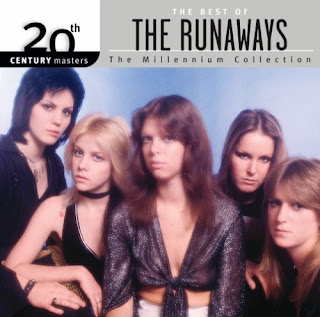 The Runaways were an American all-girl teenage rock band that performed in the 1970s. The band is best known for the songs "Cherry Bomb", "Queens of Noise", "Rock n Roll", "Neon Angels (On the Road to Ruin)", and "Born to Be Bad". The career of the band was short, lasting from 1975 to 1979.

The Runaways were formed in late 1975 by drummer Sandy West and rhythm guitarist Joan Jett. They had introduced themselves (on separate occasions) to producer Kim Fowley stating their ideas to form an all-girl band. Fowley, who was always looking for the next big thing, gave Jett's phone number to West. The two met on their own to discuss the possibilities. After rehearsing together, the pair contacted Fowley to let him hear the results. Fowley then helped the girls find the other members. Although Fowley would continue to take credit in the press for creating the band and the music, he would later admit, "I didn't put The Runaways together, I had an idea, they had ideas, we all met, there was combustion and out of five different versions of that group came the five girls who were the ones that people liked".

Starting as a power trio with bassist Micki Steele, The Runaways began the party and club circuit around Los Angeles. In 1976, they added 16-year-old lead guitarist Lita Ford and lead singer Cherie Currie to the lineup. Bassist Micki Steele left the group, later resurfacing in The Bangles. An unknown local bassist named Peggy Foster took over on bass but also left after a week and a half. Kim Fowley then brought Ann Boleyn, who later went on to perform with Hellion and Detente, as the bass player. Finally, Jackie Fox (who had originally auditioned for the lead guitar spot) was added on bass, and the line up was complete.