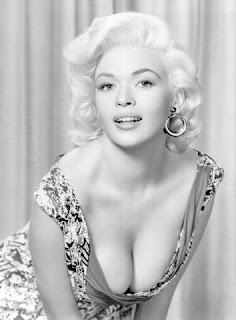 Jayne Mansfield (April 19, 1933 – June 29, 1967) was an American actress working both on Broadway and in Hollywood. One of the leading blonde sex symbols of the 1950s, Mansfield starred in several popular Hollywood films that emphasized her platinum-blonde hair, hourglass figure and cleavage-revealing costumes.

While Mansfield's film career was short-lived, she had several box office successes. She won the Theatre World Award, a Golden Globe and a Golden Laurel. As the demand for blonde bombshells declined in the 1960s, Mansfield was relegated to low-budget film melodramas and comedies, but remained a popular celebrity.

In her later career she continued to attract large crowds in foreign countries and in lucrative and successful nightclub tours. Mansfield had been a Playboy Playmate of the Month and appeared in the magazine several additional times.